Cabrini University hosted the fifth annual Forum for Undergraduate Student Editors (FUSE) conference at the beginning of November 2017. FUSE is a national organization that provides a network for undergraduate student editors and writers and their faculty advisers. The three-day conference brought together about 60 students from 13 universities for a series of writing and editing workshops and panels centered around the theme of representation and resistance.

The conference aimed to display the importance of understanding “the capacity of literary arts to evoke social change, depict the experiences of underrepresented populations, and protest injustices.” Each workshop was dedicated to speaking out, finding your voice, and telling one’s story, whether it be through Susquehanna University’s “Feminist Short-Shorts” or SUNY Geneseo’s “Defining Your America.”

Poet and activist Martín Espada kicked off the conference with a captivating reading of his poems, which “explore the immigrant and working class experience.” He read passionate poems from his published works as well as moving poetry in response to today’s political climate. Espada also hosted a workshop on satirical poetry where he read examples from Marge Piercy, Ernesto Cardenal, Jack Agüeros, and John Millington Synge before encouraging students to write and present their own satirical poetry from what they learned.

Widener University was represented by Nicole Gray, Jasmine Kouyate, Haley Poluchuck, Jennifer Rohrbach, Carlie Sisco, and Kira Smith, along with their professors. Below are reviews from Widener representatives regarding the 2017 conference:

Jennifer Rohrbach
Carlie Sisco, Nicole Gray and I presented an hour-long workshop session titled “Using Documentary Theater to Craft Monologues of Resistance.” During the workshop, we worked with student editors from other schools to write monologues that addressed the issue of polarization in our society. We used examples from Anna Deavere Smith’s 1994 book, Twilight, Los Angeles, 1992, to help students shape their own monologues. Smith’s book contains monologues from people involved with and impacted by the 1992 Los Angeles uprising in protest of the police brutality of Rodney King. 2017 marks twenty-five years since the uprising occurred, so we really wanted the monologues created during our workshop to do justice to Smith’s work and the legacy of the event. It was a little nerve-wracking to present in front of a whole seminar room of my peers, but they were extremely receptive to our vision for the workshop. It was especially rewarding to hear how the mode of monologue-writing pushed people out of their comfort zones and made them think about language–and the impact of

Carlie Sisco
The most inspiring aspect of this conference was being able to hear the incredible writing of my fellow peers at the open mics. We are a very tight-knit team at Widener and we’ve gotten to know each other not only as people, but also as writers. It was amazing to hear from the talented students at other universities and colleges who are brave enough to read personal or vulnerable pieces of work to a room filled with strangers that share the same passion. This conference allowed for so many opportunities to generate pieces as well as reading them. Between those who shared during Martín Espada’s workshop and those who read during the two-hour open mic, I’ve become so impressed and inspired by those around me. It’s a true testament to why we do what we do. As writers, we aim to inspire, move others, express a given voice, and potentially make a difference with the stories we tell. Listening to the students I’ve gotten to meet and work with over the course of three days, it’s easy to tell that we’re on that path. I’ve never felt such a part of such a talented community.

Nicole Gray
After attending Martín Espada’s workshop and enjoying how people got very into the performance element of their writing, I felt it was a must to attend the performance poetry workshop. I was glad I did. Susquehanna University held a session titled “Using Performance Poetry to Reclaim Identity” in which students were asked to explore their identity, what brought them to this place in their lives, and what sense 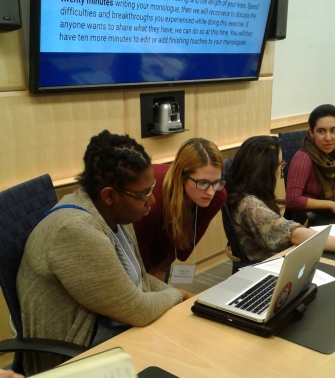 of self does to propel them in today’s society. The students running it had history in acting and were able to provide suggestions about voice and body language. They also shared information about a slam poetry club they were involved in at their own school. It was cool to hear that performance poetry is becoming more appreciated as literature in itself, since it certainly has qualities that cannot be expressed through pen and paper.

Jasmine Kouyate
During the FUSE conference, a few Widener students participated in the workshop shop hosted by fellow University of California Los Angeles students, titled “Finding Your Voice.” The prompt given at the workshop was to write about a time that you feel you should have spoken up when feeling marginalized or when your voice was undermined. We were given fifteen minutes to write about this moment in time and then an additional ten minutes to write about how the conversation would have gone had you spoken up. In this moment, I was forced to step into the consciousness of the individual whom I disagreed with and conceptualize realistic dialogue for this hypothetical situation. While I did not necessarily come to any resolution with that person, I found that exercise to be cathartic, daunting, and comforting. It was comforting to know that I had internally confronted the individual and myself, knowing that I will be prepared in the future for confronting ignorance and bigotry.

Haley Poluchuck
FUSE was interesting. I liked being surrounded by writers and getting to know people from different schools who shared my majors. Martín Espada, our guest reader, had great pieces with awesome backstories and meaning. He was very animated and was entertaining to watch. I also enjoyed hearing pieces written by the other students, read during the open mic. I learned some interesting things during the different panels as well. The first talked about writing monologues, which is a style I hadn’t written in before. It’s a great way to exercise dialogue-writing skills. Another panel I went to talked about editorial policy, which I was interested in because I want to be an editor. We discussed how to choose what should and shouldn’t be accepted in a journal. Being Widener Ink’s past editor-in-chief, it was interesting to hear from other students who ran literary journals and to hear what they did differently. Overall, the conference was a great way to meet people with similar skills and goals as me, and it was a great learning opportunity.