From March 31 to April 2, the conference for Associated Writers and Writing Programs was 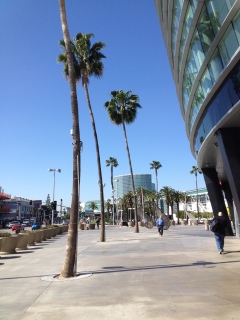 held in Los Angeles, California. AWP is a massive conference that joins editors, writers, teachers, and publishers, from students through veterans of the occupation. More than 12,000 people gather for over 550 readings and panels. Widener’s Creative Writing department was able to attend and brought four students along for the ride this year.

Before coming to AWP, I’d attended FUSE, a national conference for undergraduate student editors. That conference was quite different, and I knew it would be, because it was much smaller-scale and much more tailored specifically to student editors of literary journals. FUSE had also been held at Widener this past fall, so I didn’t even have to travel for that conference. For AWP, I literally crossed the county. 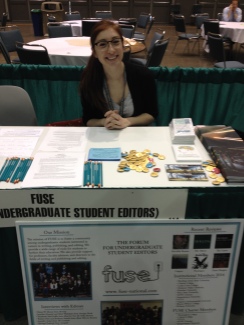 At AWP, there was a FUSE caucus for students both who had attended FUSE and who were interested in attending future FUSE forums. The caucus helped unite undergraduate student editors and students who had become old friends at this point. Undergraduate student editors interested in FUSE should check out their website here! Additionally, FUSE members took turns tabling in the book fair, a huge expo for creative writers. Though the conference was a business venture, being able to run a table made me feel like I was even more a part of AWP.

Though I knew AWP was going to be massive and with a lot more to do and see than FUSE, I was unprepared for the size of the book fair. That blew my mind. There had to be a thousand vendors packed into one room—literary journals, MFA programs, the literary journals of MFA programs and so on. There were big presses, like Tinhouse Books and Penguin Random House, and small presses, like Cactus Heart. The New York Times had a stand, as did the MLA. My favorite part of the conference had to be the massive bookfair. I spent hours in that room at a time.

While in the bookfair I got to discuss people’s literary journals, what people recommended, and how their programs differed than other places. I saw the moderator for a panel I’d attended about writing diverse characters. She and I struck up conversation, and I was able to follow up with her about what she’d discussed.

It was exciting to talk to people from other writing backgrounds as I explored the convention center. It was also wonderful to see so many writers in one place. As one Widener student noted, writers are such versatile and diverse people—you see all types.

Overall, this conference was larger than life. Besides being incredibly informative, it was also incredibly fun! If fellow student editors and writers are interested in attending, talk to your professors and see if there is a way. Next year, AWP will be in Washington, D. C., which is much closer to Widener than California, so you can bet we’ll be there again.

To learn more about AWP, check out their website here.

To read more in-depth about my AWP reflection, including some of the panels I attended and speakers I saw, click here.