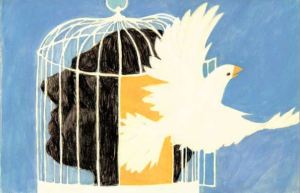 There is a debate in the writing world over whether it is best to write for oneself, or for an audience. Writing for the self is often viewed as the more artistic approach, usually for the purpose of self-expression. Writing for an audience, on the other hand, while seen as an excellent way to target a certain group of people and build a fan base, is sometimes viewed as “selling out,” as if writers only do this to make money. There are countless examples to show that this is an enormous oversimplification. I’ve actually been fortunate enough to have participated in the publication of a work that provides a fascinating answer to the question of why people write as a typist and co-editor.

The book in question is Letters to My Younger Self, a collection of writing by incarcerated men at Graterford prison, and it took several years to create. It all began when Professor Jayne Thompson, who teaches Creative Writing at Widener University, started to teach a writing class at Graterford prison, a maximum security men’s prison in Graterford, Pennsylvania. The men wrote insightfully, with powerful poetry, prose, and letters addressed to their younger selves, covering topics such as home, family, decisions, and prison.

In addition to her classes at the prison and at Widener, Professor Thompson taught some classes at Chester High School and heard the cases of juvenile first offenders in Chester, PA. Time after time, she watched her students disappear into the criminal justice system, and then heard cases from others of the same age who were also falling into lives of crime. She mentioned this to the men at the prison, and they expressed deep concern for those young people, who reminded them of themselves when they were younger, and together they came up with an idea for a book of their writing as a way to address this problem.

I was able to visit the prison for the first time a few weeks ago, and I was deeply moved by their reasons for writing, as well as their reasons for sharing their work. The men, many of them fathers themselves, expressed a desire to reach out to those young people in some way. They feel that they have failed the younger generations by making choices that led to their incarceration, because now they aren’t there to support, guide, and encourage those youngsters in a way that might be beneficial to them. They feel this responsibility not just for their own children, but for any children whose lives they might have influenced in a positive way if they were living free lives themselves. They are attempting to make up for that absence with their writing. More than anything, they encouraged their young readers to get an education, and to choose their friends wisely.

Clearly, the works in this book were written with an audience in mind, but not for financial reasons. The book can be purchased on Amazon, but the money from each purchase of the book goes to a fund for putting it in the hands of its target audience: at-risk youth. The men did not write for fame any more than for fortune, as the prison requested that their last names not be given, so only their first names and last initials are displayed beside each piece.

Are they writing for self-expression then? There are definitely elements of that, as they share many personal experiences that they feel led them to where they are now, and they may have felt some closure as they reflected in this way, but that is just one part of the picture. Ultimately, I’ve found that writers write for a myriad of reasons, and who is to say that one is better than another? This book is an excellent example of why writing for a particular audience does not necessarily imply selfish intent. In this case, it is an effort to bring about change.

To learn more about this book, and to hear some recordings of the men reading their work, check out this segment of Radio Times with Marty Moss-Coane.